Published by darrinpeppard on December 9, 2016

Today, while observing in a classroom, I listened to the story of Dr. Ben Carson.  It was essentially a summary of an interview with Ben. Dr. Carson was born and raised in Detroit, Michigan and, at one point, was a very troubled young man. Early in his elementary school life, Ben considered himself the class dummy and believed he was destined to a life of prison.  His mother served as his inspiration and, armed with only a 3rd grade education, continued to push Ben to pursue education as his one big chance at success.  Ben’s mother pushed both her sons to study and, as a result, Ben found a deep interest in science.  He quickly went from class dummy to the head of the class due to his dedication to studies and new found love of science.  Ben went on to attend Yale, majoring in Psychology and ultimately the University of Michigan medical school to study neurosurgery.  Dr. Carson is a world renowned neurosurgeon specializing in separation of conjoined twins.

I tell this story not because of Ben’s success or because I found it quite fascinating (although I do) but rather because of a small part of the story which genuinely hit me as the most powerful message from his journey.

As the story concluded and the students discussed the plot, theme, and characters, the teacher called attention to something Ben believes strongly and made a point to have students reflect on this topic.  MINDSET – yes mindset – in the interview, Ben talked about how everyone will face obstacles in their life and they will face them frequently.  The key, according to Ben, is not what the obstacle is but rather how you view the obstacle.

protect what is behind its structure. Either way, the fence is a barrier, very difficult to breach.  If you view what stands in your way of your goal, your dreams, you plans, (the obstacle) as a fence, you may easily see success in these areas as next to impossible.

A hurdle is an obstacle, a portable barrier over which contestants must leap in certain running races.  Hurdles tend to tip over whe

n kicked or struck during a race.  Hurdles could be walked around, climbed under, or jumped over.  When something impedes your path to your goal, viewing it as a hurdle may cause you pause, practice, or determination but undoubtedly will not cause your to believe it next to impossible.

In the story of Dr. Ben Carson, I found our students quite engaged and saw they reflected upon it with ease.  All of us will face challenges in our lives and will have to determine the best course of action when the obstacle rears its head.  But, if we attack the obstacle with the appropriate mindset, one that allows us to view it as a hurdle rather than a fence, success is waiting on the other side of that challenge.

My hope for all our students, and all my staff, is simply this – when they are faced with a challenge, I hope they have the ability to hold the mindset of the hurdle not that of the fence. 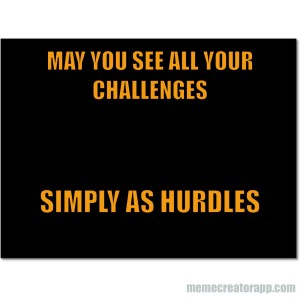