Published by darrinpeppard on March 16, 2019

As I sit here at ASCD’s annual conference, I find myself rather than thinking forward I am reflecting back. Typically when the leader goes to a conference the staff fears what might come back and what it means for them. That is not what this post is about. Rather, I want to focus on growth, mine in particular, in leadership. 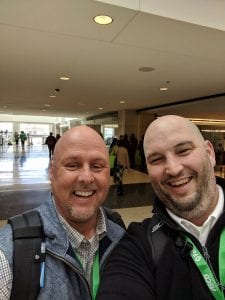 In 2016 I was fortunate enough to be named Principal of the Year for the State of Wyoming. While it was fun and humbling, the greatest part was meeting other principals from around the country. Today, I got to catch up with one of my POY alums. Jay Dostal was POY in Nebraska in 2016 and we became friends and follow each other through social media. Jay and I have a lot in common including that we both have left the high schools we led while being principals of the year. Today was the first time we have been together to visit since our DC awards ceremony.

Why is this important enough to write about? As Jay and I talked, I found some incredible similarities between his new experience and mine. We both have found the opportunity to take on the next challenge has changed how we lead. In fact, we both talked about being good at ‘principaling’ but maybe not as much at leading. I find now in my role as superintendent that I have many opportunities to ask reflective questions of principals, directors, and teachers. Each of those conversations have caused me to think back to how I have handled similar situations in previous years. Speaking with Jay today reminded me of the intentional changes I have made in my daily life and in how I lead.

I could probably share many examples but I will focus on one in particular. As a principal I was really good about running off and solving other people’s problems. When someone came to me with a concern I went straight into problem solving mode. Reality is most, and I say MOST, of the time people don’t come to their leader wanting their problem to be solved. Often, they just want to be heard. Now, when sitting with members of my team I am really intentional about listening and asking them what they want to do.

Again, reflection is so important. How often are you reflecting on lessons you teach? Do you spend time looking back at decisions you’ve made or how you’ve made them? Not everyone gets the chance to ‘start again’ in a new role like Jay and I have done, but we all should be reflecting on our work, our choices, and how we lead those around us.